This is the second post about my time in Germany.

A German church service is longer than an American one. Or it just feels that way because it was all in German and I didn’t understand a word of it.

Then came the part when our group got to sing In Christ Alone and How Deep the Father’s Love for Us. It went really well, and I think they liked it. An elderly lady told me I looked exactly like her grandson.

Then we had lunch. I don’t really remember what it was… Maybe lasagna? I know we had lasagna a once while we were there and it was wonderful.

After this, we went back to the house. Much of that day is a fog because I was extremely tired.

my lunch: schnitzel and fries 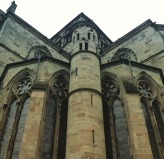 Somewhere in that tired day, we went to Luxembourg. I didn’t know it was a country until I was literally in the country. Yeah. (Here is a fun thing I discovered Googling this place: they speak French, German, and LUXEMBOURGISH. I am serious.) It was pretty beautiful, and I actually took the photo that’s the header for this post there. It’s a big bank or something.

The first place we went to see there was an American WWII Cemetery. It was surreal. All those graves were Americans who fought in the war, and here it was, being taken care of by people of a country I’d never heard of. General Patton had a special grave there that I got to see. The whole place was beautiful. 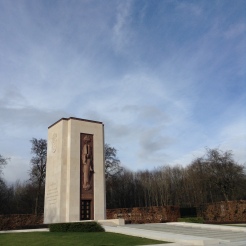 a building with an angel 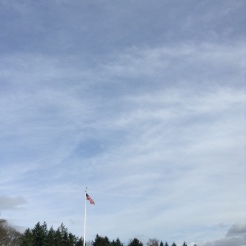 For supper, we went to a place in France called Flunch. I liked it. The servers and manager were the only nice French people I saw. Everyone else was rude. Which is sad, because I’m French.

5 responses to “Stories from Germany, Days 3-4”